A Unique Experience & A Different Perspective 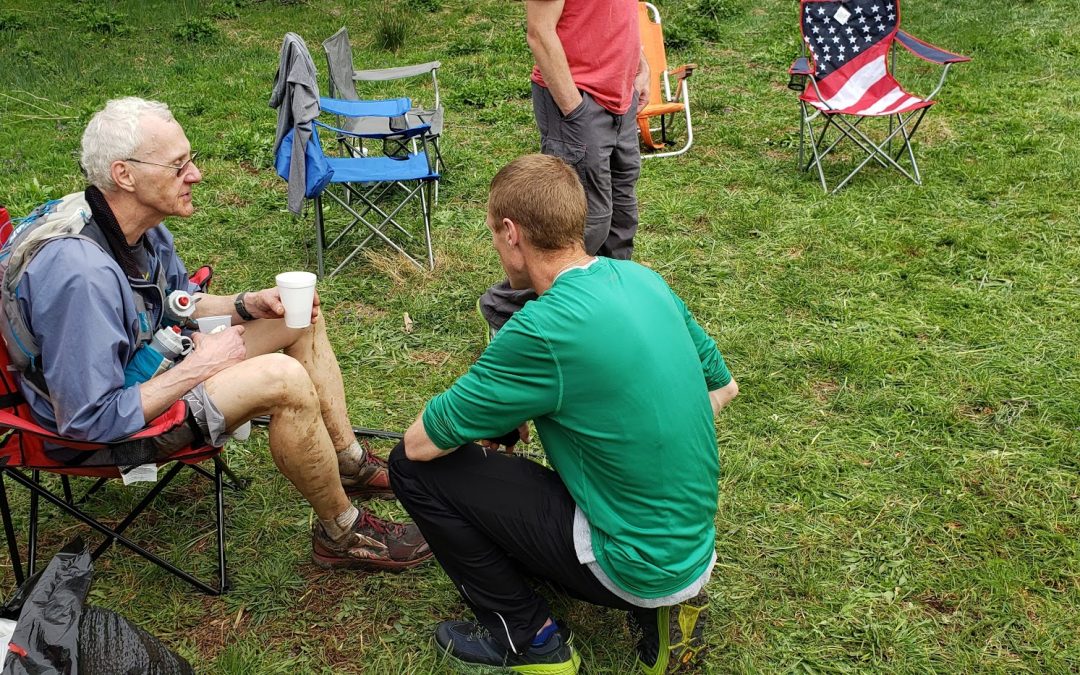 Friday, April 12th, 2019 brought the start of the Second Annual Hellbender 100 Miler and what would turn out to be a huge learning experience for me. Let me preface this by stating that I had made a comment on Facebook, two weeks prior, about how the attention of a race should not be always on the front runners, but on those at the back of the pack as they are on their feet much longer and under the burden of making cutoffs. Without intention, this race would bring home to me what this really means as you will read in what follows and through my experience in directing The Hellbender 100 Miler.

Everything was in place and I counted down to the race start. My intention was to sweep behind the last runners and pick up the course markings from the start to the first Aid Station. After that, Abby Harris, one of my lead race committee members, and I would drive to Curtis Creek Campground to see the leaders come through and make sure everything was ok and place some course markings. As we drove to the campground we chatted about the excitement of the race and the amazing community and team of people that make this event possible.

It wasn’t long after our arrival that the leaders came into the Aid Station and Abby and I worked side-by-side with our friends at the Aid Station to make sure the runners had what they needed. In and out the first male and female runners came through the Aid Station. Then something happened without intention. Usually the Race Director would move on to the next Aid Station to watch, but we stayed. The mid-packers came through, and we stayed. I knew so many of the runners, and it was great cheering them on and making sure they had what they needed for the tough climb and descent that lay ahead. Before we knew it, the last few runners were coming in, and we treated them just like the front runners. I tended to each. Filling water bottles or getting them food or taking their trash and giving them words of encouragement. Then they were off, and we continued on to the Neil’s Creek Aid Station.

We had missed the leaders, but with the use of the livetrails.net system, we could see what had transpired in our absence. When we arrived, the mid-pack runners were coming in. And again, Abby and I stayed until the very last runner came in. He sat in a chair with his gaze fixed on the ground and I squatted next to him talking about all that had gone on when suddenly he turned his head and looked me in the eye and he told me that no race director had ever stayed to see him, let alone help him at any Aid Station. He said that their concern is always for the front runners.  I saw the sincerity in his eyes and that it truly meant something to him that I was not only there, but present (and by present, I mean on an emotional level) and with him in this journey. I had to bite my lip and hold back my tears. As I held his gaze, I told him, “I’m here for EVERY runner.” I meant it then, I mean it now, and I will always mean it.

I am a runner and a human doing. I am not a being. I don’t sit still. I create opportunities and experiences that bring people together, create community, and share passion. I love people. I love you. I may not even know you, but if you were running this race, I would treat you like my brother or sister. You are family. My parents instilled in me to treat others as I expect to be treated. You are my equal and therefore I will care for you with every ounce of my love that you deserve.

When I stated that the back of the packers deserved just as much attention as the front, I absolutely meant it as well! This small exchange drove it home for me. I am sharing my passion and my love. I’ve surrounded myself with those who have the same passion and love for others in creating the unique experience we call The Hellbender 100 Miler. The story doesn’t end there as we traveled next to the Aid Station near the summit of Mount Mitchell where I would truly experience something that will remain with me for the rest of my life.

From the last Aid Station at Neil’s Creek, the runners had the make the ascent up Mount Mitchell, the tallest peak East of the Mississippi. I knew it would be tough for some of the runners to make the cutoff, but I prayed for them that they would pull it out so they would continue on their journey. The seven O’clock cutoff loomed. I had never been present when a cutoff had to be made and a runner had to be told they could not continue. A few runners snuck in and out just ahead of the cutoff and four runners remained. The cutoff time came and went and still we did not see the four for which we waited. I walked to the parking area to watch for these runners, one a friend who had been having stomach troubles.

The first appeared and I walked to greet him and break the bad news. I told the runner I was sorry. He said it was ok he just needed to regroup, and he’d be fine. I then had to bite my lip again and tell him he had missed the cutoff. I saw the words register and it broke my heart. I wanted to give him a huge hug. I know it hurts to not achieve your goal, and I can’t imagine what it’s like when someone has to rip that goal away from you even though you’re in the condition to continue onward.

I didn’t have much time to recover from that exchange before my friend came in. I couldn’t hold back my tears as I knew how much this race meant to him. I embraced him more for my own selfish reasons than for his. I just wanted him to know how much I wanted this for him. How much I wanted to be able to hand him that buckle! Damnit, can’t I just let these guys go on!?! That wasn’t the worst of it!

The gentleman that had made me utter the words, “I am here for EVERY runner” came in and I had to break the news to him. He knew it before I told him, and I could see how much it hurt! I put my hand on his shoulder and told him how sorry I was. I had to walk outside, and I looked to the sky and told myself, I now understand better, what it’s like to chase cutoffs and be told you’ve missed the cutoff. It’s painful, awful, dejecting, and I would never wish it upon anyone!

As I stood the next day at the finish line, I tried to stay in the moment and enjoy the those that would cross the finish line, hear their stories, and respect their efforts, but in the back of my mind, I remember those that did not finish for whatever reason, and I write this for you. YOU have my respect. YOU have my heart. YOU have my passion! May you cross that finish line in whatever you do next, and I certainly hope you’ll come back and finish The Hellbender next year!!!

To my staff and ALL the volunteers,

I can’t thank you enough for helping make this dream a reality and being a community that truly cares!

To those that finished,

Simply amazing! I’m so proud of you!

To all of you,

I can’t state it enough…I love you! Thank you for being a part of the Hellbender 100!

Race Director of The Hellbender 100 Miler Aric is the Founder of TrailManners, Chief Podcaster and self appointed Cheese Curd and IPA specialist.