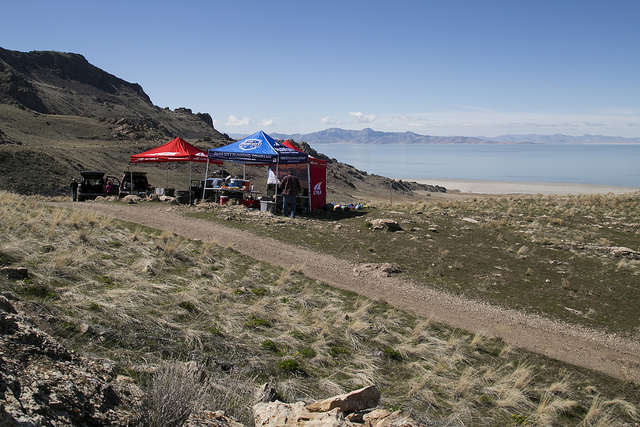 As many of you know I direct a few races.  Well, last weekend was the biggest one I direct, the Antelope Island Buffalo Run.

I thought I would go through a bit of what it takes to put on a race that regularly has over 700 runners sign up.

I started the Buffalo Run back in 2006.  Back then my limit imposed by the park was 150 runners and I had a 25K and a 50K.  I knew that Antelope Island was a great place to run, had fantastic trails, lots of wildlife etc., the main thing was going to be to convince others to come out for a race and to convince the park to let me do it.  I was shocked when I actually filled the race that first year and every year since.  Who knew?

That first year it seemed like it took forever to get everything ready for the aid stations.  I had never done this before and had to develop my methods as I went.  I think I started putting everything together that first year about February 1.  Now that I’ve done it a few times, I start putting aid station stuff together around March 1 and have plenty of time to do it.  I used to spend many late nights shopping, divvying up stuff, loading aid station bins.  No I manage to get to bed pretty much on time very night.  It helps to be an Engineer and have the sort of mindset that everything needs to be organized and in a certain order.

As far as a schedule goes, it starts the previous year not too long after the previous race.  I sit down with the park, go over what went right and what needs improvement.  Every year I tweak things a bit trying to improve the experience for the runners and make things operate smoother for the volunteers.

One thing that really helps is my volunteer coordinator.  Britta has been coordinating volunteers for me for the past nine years and does a stellar job.  To the point that I don’t even bother asking her how it’s going until about two weeks before the race.  She has it dialed in.  One of the things that helps is that she has developed an extensive network of past volunteers.  There are some folks that come out year after year just to help out.

I get asked all the time if I make money doing this.  The simple answer is yes, although I certainly won’t get rich.  I make enough to allow me to put the races on another year and support my running habit the rest of the time.  Otherwise I wouldn’t be able to keep putting on the race.  Would you do something every year that you lost money at?  Yeah, my wife would put a stop to that nonsense real quick.

So, here’s a few numbers for you for the Buffalo Run.

Water – I start out with roughly 450 gallons.  That’s almost two tons of water.  It comes from the artesian well behind the McDonald’s in North Ogden.  It tastes way better than my tap water.  We get more water out on the island if we need it.

There were 500 bananas and 500 oranges out on the course,  25 jars of peanut butter, 15 jars of Nutella, 17 bags of potato chips, 28 loaves of bread, 12 bottles of jelly, untold packets of ramen noodles, we made about 10 gallons of coffee.  Then there’s the innumerable cans of potatoes, gallons and gallons of HEED that were consumed, not to mention the chocolate covered pretzels and thousands of cookies.

So it takes a fair amount of food to feed all of you hungry runners.  My biggest fear is running out of food for the back of the pack.  As a result I usually end up overbuying and not cutting it too close.  As an aside, a lot of the leftover unopened food gets donated to the Ogden Rescue Mission the next day, including all of the left over fruit and cans not used for the stew.

I occasionally get asked why races are so expensive, so here’s a breakdown of just a couple of the costs associated with the Buffalo Run.  There are many, many more.  Still, my goal is to try and keep entry fees down below what the norm is for the distance.

Park – I pay them over $7/runner when the fees are all added up.

I’ve had people ask how it is working with the park.  I always hear from other race directors about how cities and parks would rather they go away so they don’t have to deal with us runners.  I have to say, Antelope Island State Park has been great to work with.  They are usually pretty open to working with anyone that wants to do some sort of event that is compatible with their mission.  They also know that you runners are very mindful of the environment out there and go out of your way to make sure that the island is left in the same condition as when you showed up.  That helps a tremendous amount.

So what do I get out of the deal besides the untold riches I accumulate?  I really love seeing everyone come out.  Many of you I only see a couple of times a year and it’s like a reunion for me.  I love seeing people cross the finish line doing something that perhaps they never thought they could do, yet they did it.  AS an example, I was there this year when two of my 100 mile runners crossed the finish line.  Their first 100’s.  It was freaking awesome to see their reactions, their family’s reactions.  Just the joy on their faces.  The many of you that come up and tell me what a great time you had means a tremendous amount to me, you have no idea.

So keep on coming out for my races.  I love putting them on for many reasons.